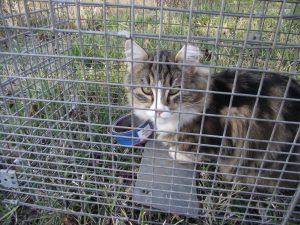 My story, Feral Cat Fiasco: Lovable Until They’re Not, is featured in the January 2018 edition of Idaho Magazine.  There were several edits to the story so as not to offend the sensibilities of the magazine’s readers.  However, I have no such apprehensions, so you can read a bit that was cut from the story below.

Also, to see more information about my troubles with feral cats, check out this post on Feral Cat Solutions.

Well, if they want to maintain a feral cat colony, let them do it at their house, I thought.  And that’s when an idea took root.

The Assessor’s Office maintains information on all the property owners in the county.  I gave them Tara Wimer’s name and hit pay dirt.  She lives at 1025 Julianne Way in Moscow, a part of the county known as Rat Flats because the area is over-run by rats from the adjacent landfill.  It was the perfect location for a feral cat colony and if one didn’t exist already, I had every intention of founding one.  Mama Cat was watermelon shaped again; she would make the perfect feral cat colony starter pack.

I immediately engaged in a reconnaissance mission.  Tara Wimer’s home was a run-down old trailer with an unusual wire contraption jutting from the front of it.  It didn’t take long to realize that the chicken wire conglomeration enabled her cats to access part of the yard, via the windows, (one would think a cat door would make more sense) and was designed so her cats couldn’t escape.  I had wire cutters at home and was more than a little temped to deposit feral cats directly into the wire enclosure so that she could come face to face with the cats she insisted on ‘saving.’  I would even politely patch the hole so her cats wouldn’t accidentally wander off in the process.

As soon as I got home I set the trap.

My plan was foiled the following day when my power steering went out.  Leaving the car with a mechanic, I bummed a ride from a friend.  That evening, just as the sun was setting I caught Mama Cat.  Excited, I called Bruce.

“I’ve got Mama Cat!  Tomorrow I need you to give me a ride; I know exactly where to release her.”

“And where’s that?” Bruce asked.

I explained my relocation plan.

“And what are you going to do if you get caught?” Bruce asked.

“What if she calls the cops?”  Bruce was attempting to be the voice of reason.

“I have it on good authority that there are absolutely no ordinances regarding feral cats on the books in Latah County,” I replied.  It was the mantra Tara Wimer trumpeted, loudly and often.

“This reeks of malicious mischief,” Bruce said.  “I won’t be an accessory.”

Deflated, I lamented, “But I’ve already caught Mama Cat; she could pop any day.  I don’t want another litter on the property.”

Locally, copies can be found at BookPeople of Moscow and the Latah County Library.

Had a nice chat with a couple Latah County Sheriff’s Deputies today.  One said he was a fan of IDAHO Magazine, had read and enjoyed the article.  The other lives just north of Potatch and has feral cats on his property.  He said he would talk with the County Commissioners because he’s also frustrated with the the animal shelter’s refusal to assist anyone from the county who wants to rid themselves of feral cats.  The size of the feral cat colony out at Syringa Trailer Park concerned him, not to mention the 74 cats now living in an abandoned house in Bovill.

You can now read the entire January issue of the magazine for free by clicking here:  https://www.idahomagazine.com/sponsor/january-2018-basalt/

Yesterday I called Animal House Ferals to chat about their program.  They don’t take truly feral cats, but focus on strays who’ve had some human interaction before being dumped or abandoned.  I was pleased to see that they support euthanasia, as that is often the most humane and cost effective thing that can be done for a feral cat.  I have long believed that no kill policies take money away from healthy, adoptable cats in order to prolong a pained existence of a cat that is essentially dead already.

It took some digging to find out who Behler was.  It turns out that this quote came from an interview Jennifer Behler, the chief operating officer at the San Diego Humane Society, gave to petmd.

So, it seems there is still no assistance available for those burdened with feral cats, but if you live in Latah County and have strays frequenting your property, Animal House Ferals might be able to help.