My debut novel, Klara’s Journey, is the first book in the Kenetlon Sagas trilogy.

Curious about this story? Here’s the back cover blurb: 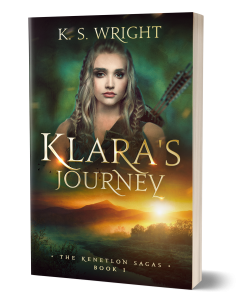 Klara doesn’t have to think twice when a band of itinerant travelers makes her an offer she can’t refuse. Eager to escape life as the village whore and knowing only that the ragged band of wanderers is destined for the wildlands believed to be the ancestral home their Goddess, she joins their expedition. Signing on as camp cook and huntress, she embarks on an adventure that leaves her torn between hope and fear. Aided by an unhelpful wizard, Klara finds herself pursued across nations by rabble-rousing religious zealots and ushered into a journey of self-discovery, tapping into a new world of sexual exploration rather than exploitation. Klara’s journey catapults her into the lives of a banished nobleman and an exiled king, either of whom may shatter her heart . . . and may lead to the ultimate betrayal.

The Upbreeder, the second book in the Kenetlon Sagas trilogy has been written, but not yet edited. The third book in the trilogy is presently an unfinished draft. The second book must be fully edited before publication can proceed because its first chapter will be included as a teaser at the end Klara’s Journey.