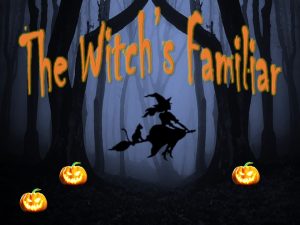 ‘Tis the season to celebrate cats. Halloween cards and decorations feature black cats sporting witches’ hats, slinking through graveyards, and riding on brooms. Halloween is synonymous with fun—and frights, but for cats, Halloween tricks can seem all too real. Strangers slink through the neighborhood. Unusual smells and horrifying noises fill the air. Costumes turn ordinary people into monsters. Make no mistake, Halloween is a spooky time for cats. Those frights come with an even more frightening history.

The Encyclopedia Britannica defines a familiar as, “a small animal or imp kept as a witch’s attendant, given to her by the devil or inherited from another witch. The familiar was a low-ranking demon that assumed any animal shape, such as a toad, dog, insect, or black cat.” According to Rosemary Guiley’s, Encyclopedia of Witches and Witchcraft, during the days of the European witch-hunts, familiars were believed to be given to witches by the devil and were, in essence, small demons used to do the witch’s bidding. Cats, especially black ones seem to be the favored vessel for demons to inhabit.

These are rather narrow-minded definitions. The concept of familiars has been a vital component of numerous cultures throughout history. Cats had a lot of clout in pre-Christian cultures. They were gods in Egypt, sacred to goddesses all across Europe, and pulled Freya’s chariot.

In European folklore, familiars are supernatural entities that assist cunning folk in their practice of magic. Recurring motifs in European fairytales display a strong belief in familiar spirits. For evidence, look no further than the Brothers Grimm. In Puss-in-Boots, a cat possessing supernatural qualities assists the protagonist. This tale, and others complied by the Grimm brothers, offers direct links between folklore traditions and belief in familiar spirits. According to historian Emma Wilby “Fairy stories and myths originate from the same reservoir of folk belief as the descriptions of familiar-encounters given by cunning-folk and witches.”

The accounts of familiars are striking for their ordinariness. The animals are all ones commonly found in the European landscape, enabling them to pass unnoticed as they carry out their tasks. Cats, dogs, and hares are the usual suspects. However, any animal, wild or domestic, can be a familiar.

Early on, benevolent familiars served magicians, shamans, and village healers. The familiars helped diagnose illnesses much like cancer dogs do today. Familiars also found lost objects and treasures, which is not all that different from drug and bomb sniffing dogs, not to mention the use of bloodhounds to find missing persons. Often seen as being imbued with supernatural powers, familiars were also used for divining. Modern day equivalents are Paul the Octopus who predicts the outcome of soccer matches during the World Cup and Punxsutawney Phil who predicts the spring thaw.

Into this rich and vibrant religious landscape, Christianity and Judaism did come. The Jews weren’t wild about venerating any animal worshiped by their former enslavers and early Christians were determined to stamp out all vestiges of the pagan religions.

Despite the early positive influences, the most common and enduring image of a familiar is the evil witch with her fearsome black cat. Every October, storefronts fill with images of witches, loyal cat at their side. These witches’ familiars assist them in casting spells, or in the case of Harry Potter, delivering the mail. This archetype, straight from the ghastly Halloween tales of our childhood, is rooted in the fear and superstition of the Dark Ages.

When acting in the service of cunning folk, familiars were through to be benevolent, but in the service of a witch, the animal was deemed malevolent and often labeled as a demon. The 1604 Witchcraft Act only persecuted evil spirits. Consulting good spirits for help was above board and legal, though not actively encouraged. That is, until a cure didn’t work or a crop failed.

Those who sought healing salves, love charms, or consulted wise women for divination very often sought revenge when they failed to get the expected results. Once outed, anything a suspected witch did was considered the work of the devil. Neighbors questioned by witch-hunters, eager to avoid torture themselves, relayed tales of the witch petting her cat while talking to it. Those utterings were presumed to be curses.

Christian thought dominated society, so anyone who suffered misfortune was able to blame their ill luck on a witch. Emma Wilby reminds us that during this period, “The harsh and unyielding physical world was also an enchanted one. Powerful occult forces permeated life at every level.” When someone fell ill or a crop failed, it was much easier to believe the old woman next door had a grudge than admit they had succumbed to a fluke of fate, foul weather, or festering infections. Many people kept cats as pets or as a means of keeping down the population of mice and rats. So, if the old woman preferred the company of her cat to other people, it was that much easier to believe ill of her.

In keeping with the fearmongering, Christianity dedicated significant resources to bastardizing cats. During the witch-hunt era, many animals were sentenced and killed alongside their owners. The fear that all cats were witches’ familiars was a primary reason for the infamous cat massacres that swept through medieval Europe. British Queen Elizabeth I (1533–1603) burned cats alive as part of her coronation celebration. By the time Protestant Reformation had swept through Europe, hatred of cats had become non-denominational. The wholesale slaughter of cats allowed rat populations to rise unchecked, resulting in an increased incidence of plague outbreaks.

Most information regarding familiars derives from transcripts of witch trials held during the 16th and 17th centuries. The English court system that tried witches was the Essex. Worship of anything aside from Christianity was deemed Satanic and accusations of witchcraft demonstrated a strong prejudice against those who practice ancient/indigenous religions.

The inquisitors took the Bible to heart, often citing scripture. “A man or woman who is a medium or spiritist among you must be put to death.” (Lev. 20:27) Deuteronomy 13 not only laid the foundations for the trials, “You must inquire, probe, and investigate it thoroughly,” but also extended the death sentence to include livestock and other animals owned by the supposed witch. England’s Witchcraft Act of 1563 associated keeping cats with wickedness, leading to the executions of cats and their owners. The massacres continued well into the Age of Enlightenment, with accounts of cats (and their owners) being tortured and burned alive.

In colonial America, the 1692 Salem witch-hunts include several counts of animal familiars. The afflicted girls often had visions of familiars and association with a familiar was used as evidence to convict suspected witches. Evidence of possessing a familiar included: providing a cat sleeping quarters in a basket lined with wool; feeding it milk, bread, or meat; and naming a cat. Some names were common, others affectionate, and still more outrageous. Perhaps the best known, is Pyewackett, a cat who lived in Renaissance England. Renowned witch-hunter Matthew Hopkins famously claimed, “Pyewackett is a name no mortal could invent.”

Witch trials often included physical examinations of the accused, searching for the witch’s mark. This mark was supposed to be an extra teat found somewhere on the body, from which the familiar was suspected to suckle. Any evidence of a mark was a sure sign of guilt. Moles and warts were often claimed to be witch marks. In absence of such a blemish, it was claimed that the familiars subsisted by sucking blood from the witch’s fingers.

How did the witches conjure their familiars? That involved another hated Christian pastime. In 1653, Wiltshire cunning woman Anne Bodenham is on record saying conjured her familiars by reading books. In some cases, the familiars appeared unbidden, as was the 1646 case with Huntingdonshire witch Elizabeth Chandler. Chandler insisted she could not control her two familiars, named Beelzebub and Trullibub, and had prayed for god to “deliver her therefrom.”

As Thomas A. Donaldson points out, the relationship between witch and familiar is complicated. Familiar don’t always do what they’re told. Cat owners everywhere know how difficult it is to get them to do anything, which makes them practically useless for carrying out demonic chores. And one must consider that in exchange for magical help, the familiar also makes requests of the witch. In Macbeth, the grey cat summons the witch, not the other way around.

Witches and cats became so entwined during the witch trials that owing a cat was enough for heretics to be suspected of witchcraft. Some people believed cats were actually witches in disguise. If so much as a fly buzzed through the window, the inquisitors claimed it was a familiar. Killing the familiars was thought to destroy the witch’s power, making it easier for the accusers to ultimately kill the witch. This prejudice continues today.

Christians love to blame their own bad behavior on others. Animal cruelty is no exception. When citing the reason for suspending adoptions in October and on any Friday the 13th, Karen Buchan, community projects manager for Palm Beach Animal Care and Control says, “There are satanic sacrificial rituals that still exist in our country and around the world.” The quote rings with the same hysteria common during the witch-hunt days of prior centuries.

“For the Christian,” observes T.J.Banks, “the black cat was always Lucifer’s messenger. And sometimes [Christians] revenged themselves on the black cat for all the fear they had of the Devil.”

“The perception of danger to black cats on Halloween has become so prevalent,” says Franny Syufy, “that many shelters and humane societies refuse to allow adoption of black cats during the entire month of October.”

Articles and chain e-mails examined by urban legend site, Snopes.com, reveal that panic-driven fears of Satanic sacrifice has expand beyond black cats to include pure white cats, and now to cats of any color. Early articles warned against ritual sacrifice on Halloween, then grew to cover the entire month of October. In 2020, it seems the sacrifices are no longer restricted to Halloween, but can occur on other ‘satanic holidays.’ The hysteria follows folkloric patters, compounded by social media widely spreading false information.

Fortunately, not everybody believes that black cats are in danger on Halloween. Dr. Marty Becker, DVM, scoffs at shelters that cease adoptions in October. “These ‘black cat policies’ are based on urban myths,” he says. At least Becker is smart enough to know that no witch would harm her familiar. As evidence from the witch trials points out, witches would offer kitty a warm dry place to sleep, plenty of food, and a cute name. It’s the Christians who go around killing cats.

That doesn’t mean your cat isn’t in danger on Halloween. The kid next door may not be a kooky Christian eager to rid the world of ‘devil cats,’ but there is a lot of activity Halloween night that poses a real danger to your feline friends.

If you found this information useful, share it with your cat-loving friends. And, as always, happy haunting!

3 thoughts on “The Witch’s Familiar”