I am conflicted.  I didn’t used to be.  I used to know where I stood.  Kneeling during the anthem was a-okay by me!  But like John Kerry, I was against it before I was for it.  Or perhaps it was the other way around, I can’t remember now.

It all started innocently enough.  I wondered why it was completely acceptable for some drunk-ass-Trump-supporter to be up on the concourse emptying his bladder, pants around his ankles, during the national anthem, but unacceptable for players on the field to give their rapt attention to the singer while silently kneeling.  Then I searched for pictures of football players kneeling to make a snarky meme.

The pictures I found weren’t of players protesting police brutality directed toward the black community.  The pictures I found were of . . . ahem . . . Tim Tebow.  Yes, the NFL darling of the Christian community, he knelt.  Colin Kaepernick is also Christian and a kneeler.  And that’s where I got all tied in knots.  There was outrage over Tebow, too, just from the other side and I was part of it. 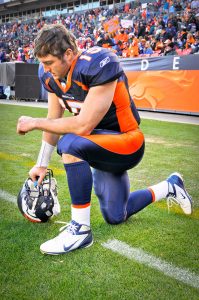 I am not Christian.  Heck, I don’t even like Christians unless they come from the “Jesus was a liberal camp.”  If you aren’t willing to feed the poor and heal the sick I have no use for you.  So, I didn’t like it when Tebow knelt.  I thought he should keep his personal beliefs off the field.  And now, a nation full of Tebow lovers is insisting Colin Kaepernick (and everyone else) refrain from doing the same.  Good golly, what’s a girl to think?

This isn’t about the anthem.  If it was, the concourse would be closed so you couldn’t buy beer and hotdogs or take a piss during the middle of it.  It’s about the 1st Amendment and who has a right to free speech.  The answer, in case you’re curious, is everyone.

Tim Tebow gets to kneel, even if I don’t like it, and so does Colin Kaepernick.  Americans have missed an opportunity for dialogue.  Both men felt they were doing their Christian duty.  The difference is Tebow fed the hypocrites, letting them believe kneeling was enough to keep them in God’s good grace, whereas Kaepernick offered an uncomfortable reminder that faith without works is dead.  And, even as the heathen that I am, defending the oppressed is something I fully support.

Isaiah 1:17 (NIV)
“Learn to do right; seek justice. Defend the oppressed. Take up the cause of the fatherless;  plead the case of the widow..”