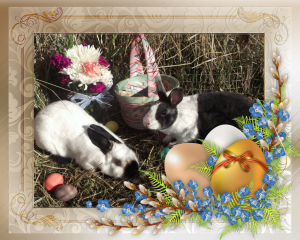 According to legend, a magical white hare wanted to please Eostre by bringing her a gift.  After careful contemplation of which gifts to bring, he settled on eggs, however, not the usual white or brown ones.   Using his magical powers, he charmed the eggs, so the shells were a variety of pretty colors.  In lieu of a basket, he presented his gift in the very same nest from which he stole the eggs.  The goddess was very pleased with the gift and bestowed upon the hare the nickname ‘Egg Bringer.’  For this reason rabbits and hares, especially white ones, are sacred to her.

In ancient times, exchanging eggs was thought to ensure abundant crops in the coming autumn.  Saxons exchanged colored eggs as a talisman, representing new life.  The eggs were consumed in Eostre’s honor.  In Celtic culture, Druids dyed eggs red to symbolize the sun and dyed eggs were often given as gifts or fertility charms.  Rabbits and hares, also considered sacred in Celtic culture, were not eaten.  Figurines depicting hares appear on ritual objects dating back to the Celtic Iron Age (800 BCE to 450 BCE).

The Ostara Sabbat marks the end of the dark half of the year, celebrating winter’s end and honors fruitfulness of the land.  It is a time for balance, renewal, fertility, rebirth, beginning new projects, spring cleaning, and fresh starts.  This is evidenced by the newness surrounding us each time we step outside.  Green shoots have begun to show themselves.  Buds are swelling on the branches.  Early flowers such as forsythia, tulips, hyacinths, daffodils may even begin to bloom.  Deer start re-growing their antlers.  Rabbits begin their wild dances.

The phrase “Mad as a March Hare” has its basis in biology.  Rabbits have long been associated with lust and sexuality.  Mating season begins at the vernal equinox, since 12 hours of daylight is necessary to trigger does to be receptive to the bucks.  During this time, rabbits and hares chase each other around, dancing and jumping, as part of their mating rituals.  Males box with each other in hopes of claiming access to does.  The frenzied activity in the rabbit population is soon followed by birds beginning their own springtime mating rituals, solidifying the hare’s place as the egg bringer and the association still stands today.  The Pagan Eostre’s popular hare of fertility has since been transformed into the Easter bunny.

Ways to Celebrate the Holiday 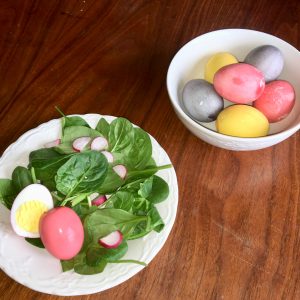 Like Eostre’s magical hare, you can celebrate the holiday by dying eggs.  If you are feeling adventurous, skip the chemical dye kits available at the grocery store and dye eggs the way the druids did, using beet juice, turmeric, and grape juice.  I suggest putting your bowls on a baking sheet to prevent spillage since the grape juice and turmeric may dye your countertops, forcing you to bleach the stains out later.

Another way to celebrate the season is by recreating the hare’s gift to Eostre via egg nest cookies.  Below are three recipes that are sure to be crowd pleasers.

In a large bowl, stir oats and coconut together until combined well, then set aside.  In a saucepan, combine butter, cocoa powder, sugar, and milk.  Cook for 3 min. then add vanilla.  Pour over oat and coconut mixture.  Quickly shape into ‘nests’ and add jellybeans.  Place each completed nest on a sheet of waxed paper and allow to cool until firm.

In a large bowl, stir together the sweetened condensed milk, egg white, vanilla extract, and salt.  Add coconut and mix until combined well.  Using fingers, form dough into nests and place on prepared baking sheet.  Bake for 17 to 20 minutes, until slightly golden. Cookies will spread, upon removing from oven, quickly reshape nests using damp fingers and a plastic spatula.  Cool cookies on the baking sheets until they are firm, about 5 min..  Using spatula, transfer nest to a rack to cool completely.  Once nest are cool, fill with Nutella and top with 3 egg-shaped candies.

Melt candy in a double boiler or using a microwave.  If melting in the microwave stop to stir every 30 seconds until candy is smooth. Stir in Chow Mein noodles. Drop spoonfuls onto waxed paper.  Make an indentation in the center of each with your thumb and add jelly beans. Let stand until set. 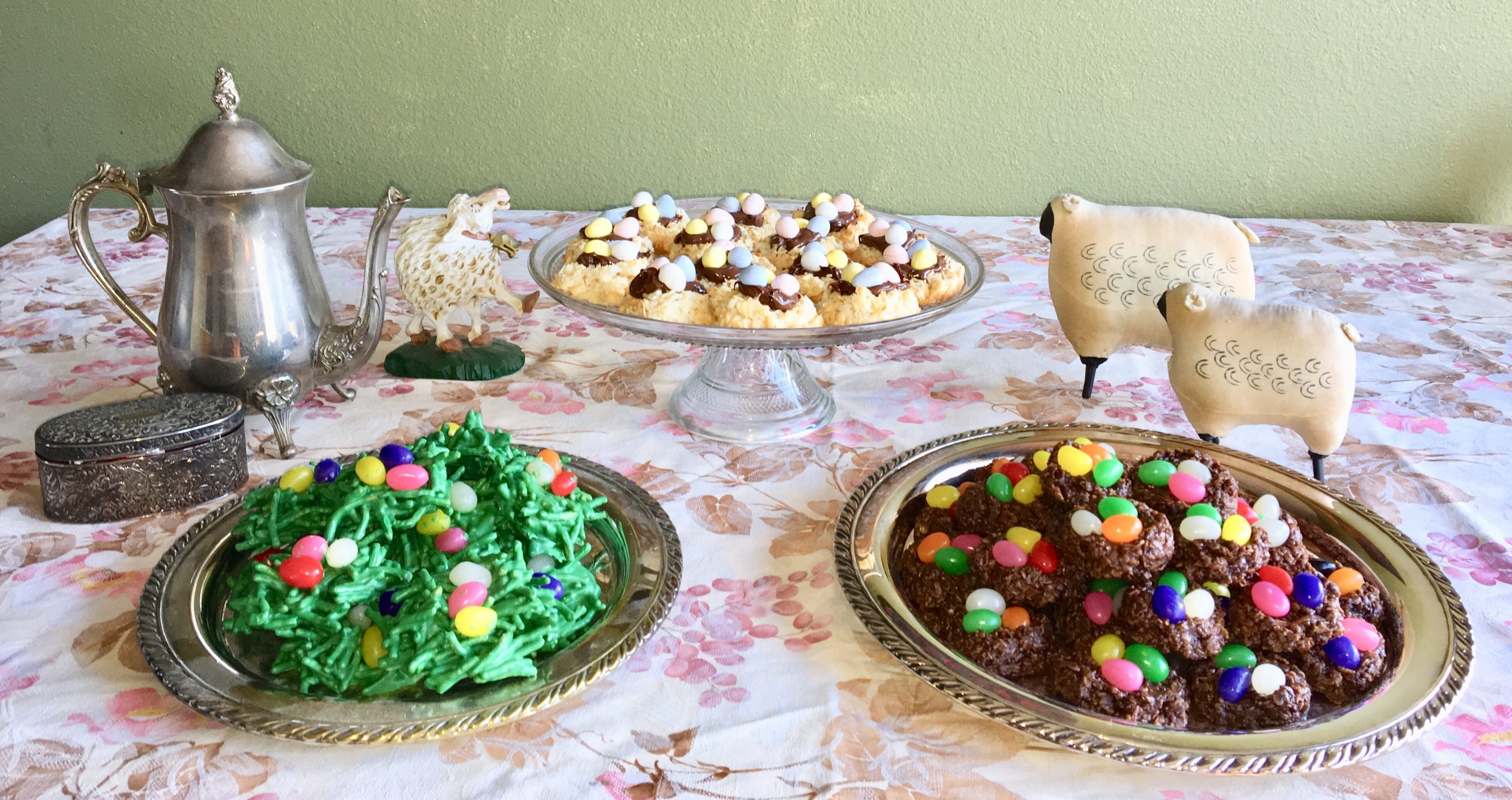