This morning I met with the Latah County Commissioners.  I have included my PowerPoint presentation here:

And you can see the letter I wrote to the County Commissioners which resulted in my being granted an audience here: May 18-Cats

Since submitting the SNAP application on May 15, 2017 I have managed to capture 3 kittens.  It’s been a month and SNAP has yet to contact me regarding my application, so their statement that it may take up to a month to receive a decision is false.  It clearly takes OVER a month.  And in case you’re curious, that mama cat, who had the first litter last year, and another litter this year, is pregnant again.  Obviously, taking prompt action to reduce the number of stray and feral animals isn’t much of a concern for them.

The shelter refuses to take the kittens until they are tame.  I was told to just keep them in my bathtub until I could pet them and they learned to use the litter box.  I have also been told that I must pay the $35 per animal surrender fee (a total of $105 for the three of them.)  The animal shelter in Moscow is the only shelter in a quad-county area that expects residents to tame stray and feral cats first and pay the surrender fee.

I also learned that the Humane Society of the Palouse (HSOP) refuses to accept any cat coming from Robinson Lake Road (the area surrounding Syringa Trailer Court), regardless of whether or not it’s feral.  That’s because the cats in that part of the county are infected with the feline panleukopenia virus (FPV), a viral infection caused by feline parvovirus. The virus is so contagious that HSOP won’t even allow people who live in that part of the county to enter the shelter.  (The county’s best estimate is that there are between 400 and 600 feral cats and 200 stray dogs in that area.)

The FPV virus attacks the intestines of infected cats, causing their intestines to cave in, resulting in internal hemorrhaging.  The cat slowly bleeds to death from within.  FPV is primarily spread through contact with an infected animal’s bodily fluids and feces.  However, fleas are also carriers and can spread the disease.  FPV can be spread across long distances through contact with clothing and shoes of people who have been in contact with infected animals or fleas.  Even cats who are kept indoors are susceptible because the virus can be carried in on the shoes of their owner.  Like all parvoviruses, FPV is extremely resilient and can survive for over a year in the environment.

Cats infected with FVP and FIV only have three options: 1) Succumb to the disease, which is a slow and painful death, 2) Overcome and survive, usually after expensive veterinary care and treatment, or 3) Become carriers and pass the disease on to other animals.  So, if we truly care about the health and wellbeing of animals, why are we allowing hundreds of animals to suffer, dying a slow and painful death?  Likewise, with a disease this deadly in the county, why are we allowing the infected animals to live, thereby permitting the disease to continue its slow march towards city limits where it will endanger the lives of all our pets? 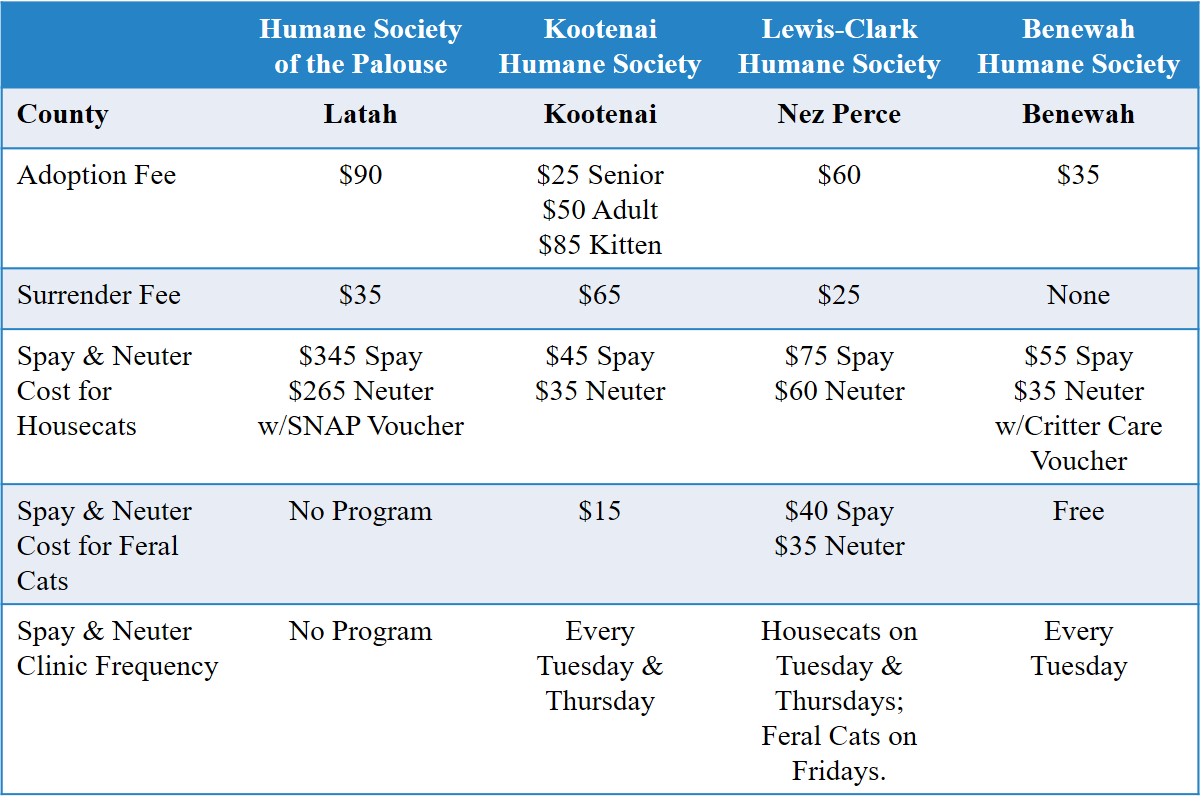 The Humane Society of the Palouse receives $20,000 from the Latah County Commissioners and $45,905 from the City of Moscow annually.  By contrast, the Benewah County Commissioners give their shelter just $250 per month and the City of Saint Maries provides no direct funding, but is generous enough to waive the water and sewer bill for the animal shelter.  Benewah Humane Society contracts with the Washington State University School of Veterinary Medicine to provide spays and neuters of feral cats free of charge to the residents of Benewah County.  A volunteer drives the feral cats to WSU on Tuesday, then the vet students have the week to practice on them before the cats are returned to the shelter in Saint Maries on Friday.  The Benewah Humane Society Shelter Director said that WSU was very grateful to have access to the county’s feral cats in order to use them for teaching purposes at the university’s Veterinary Hospital.

The Kootenai Humane Society receives no funding from either the county or any of the cities within Kootenai County; they fund all their programs from donations, grants, and the income received from the services they provide.  And with no funding from the cities or the county, they are able to offer $15 spays and neuters for feral cats.  Not only that, but they collaborate with other counties in need.  Shoshone County has a ‘Cat Wrangler’ program where volunteers capture feral cats and deliver them to the Kootenai Humane Society to be spayed and neutered.

Also, when an animal is old, sick, feeble, or infirm, and vet bills become too much for the owner, most shelters offer euthanasia to end the suffering and allow animals to die with dignity.  When feral animals come in to the shelters, showing obvious signs of physical distress, illness, and disease, many shelters offer that same kindness, free of charge.  It would not only be irresponsible, but inhumane, to do otherwise.

June 16, 2017, Edit to Add:  The meeting with the County Commissioners made the front page of the Moscow-Pullman Daily News. 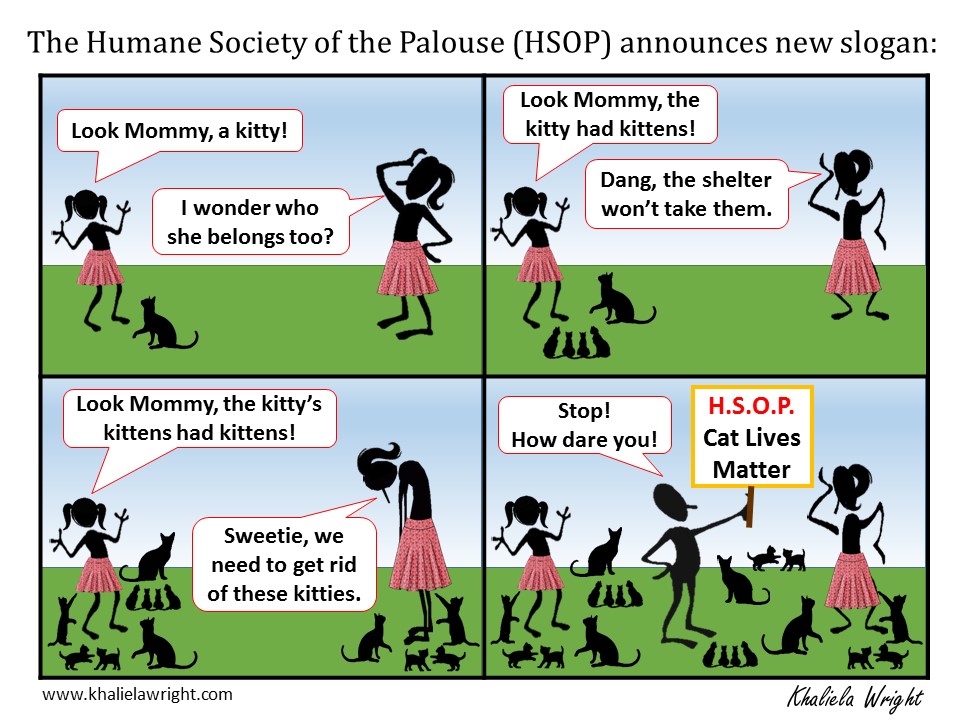 June 22, 2017, Edit to Add:  I received my SNAP application back in the mail today with a note stating, “Sorry, we do not work with feral cats.”  I was not surprised that it was postmarked the day after the article that ran in the Moscow-Pullman Daily News.

Guns and Cats
The Witch’s Familiar
Storm: The Cat who Lived