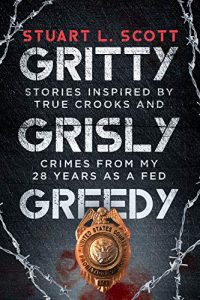 Gritty, Grisly, Greedy: Stories Inspired By True Crooks And Crimes From My 28 Years As A Fed.
A collection of short stories by Stuart L. Scott

It’s rare to get fiction and nonfiction all in the same book, but Stuart Scott artfully manages to do both.  His book includes 13 short stories, ranging from well researched accounts of actual events, like the “The Easter Massacre Mystery” that occurred in Pullman, Washington in 1949 to fictionalized accounts of events using characters loosely based on parolees he supervised over the years, like “Pinky and the Piper,” the story of a botched bank robbery in Priest River, Idaho.

Other stories include “The Tooth Fairy,” a Spokane, Washington based story involving a pair parolees. One traded drugs for gold teeth which he peddled at the local coin shop, the other was a member of the Aryan Nations and had a proclivity toward telling Jew jokes. And “Fifteen Minutes of Faith” a story loosely based on Little League Baseball fraud in Coeur d’Alene, Idaho.

At the end of each wild tale, the author includes notes regarding the actual events that inspired the story. Despite the fact that names and places have been changed to protect the identities of the guilty, those who have lived in the area for ages (and have long memories) can tease out the true stories behind the fictional façade.  Such was the case with “Idaho Catch and Release,” the tale of bestiality in Sandpoint, Idaho. There is nothing quite like recalling nefarious deeds from days gone by and my jaw dropped open as I realized, I remembered the offending couple and the dog.

If you are looking for a light summer read to get your mind off the pandemic and protests, this is a great option.  It will take you on a walk down memory lane, to other times and other places that were equally messed up.