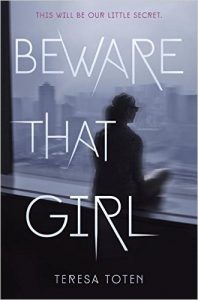 Beware That Girl is a rags to riches story that left me shaking my head.

Kate O’Brien, a pauper and con-artist with a brilliant mind, gains admission to Waverly, an elite all girl high school in New York City.  Despite the fact that it’s not a boarding school and all the characters are high school students, everyone’s parents are neatly tucked away on foreign business trips, living in London, deceased, or incarcerated, leaving the girls unattended to ruin their lives.  Oh, and all their parents let them drink, and so do all the restaurants in the city, actual laws be damned.

If the author doesn’t have the girls engaged in a cascade of bad decisions, then she’s busy dropping names of designer labels.  Tiffany’s, Doc Martins, Jimmy Choo, Chloé, Louis Vuitton, Hermès, Patek Philippe; please kill me now.  And don’t get me started about the name dropping of artists.  It served as a constant reminder that nearly all the characters in this book are shallow and unlikable.

As for the story, con-artist Kate moves in with mental-case Olivia in her attempt to climb the social ladder.  Olivia falls hard for the school’s new advancement chair, Mark Redkin.  Mark’s not just a player who’s screwing the school’s secretaries and the guidance counselor, as well; he’s also a sociopath with a thing for young girls.

True to all prior bad decisions, Olivia gets involved with Mark and when she comes clean to her roomy, Kate, things get weird.  Screwing a school administrator isn’t scandalous enough, but she also allows him to beat her and carve on her body with a knife because “she is his canvas;” it’s not physical, sexual, and emotional abuse, it’s art.  Now would be a great time for character growth, but the only thing that registers in poor Olivia’s mind is disappointment because hiding the scars means she can’t wear a bikini while vacationing in Rio over spring break.

Rather than tell Olivia’s father, the school administrators, or even the police what happened, they decided to blackmail Mr. Redkin and end up accidentally killing him. The means by which they dispose of the body and the handling of the subsequent police investigation left me wondering if the author has as tenuous a grasp on reality as her characters.

There is nothing to recommend this book.

This review was completed using an advanced copy of uncorrected proofs.