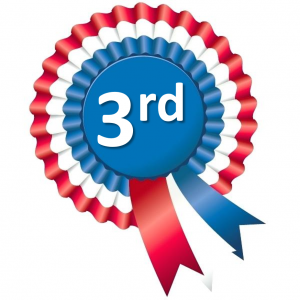 The sweltering summer sun beats upon me with laser-like precision, its rays scorching the exposed skin on the back of my neck.  Fresh-cut grass flies from the furiously rotating blade of the mower, sticking to my sweat-stained shirt, as I methodically restore order to the backyard.  Over the full-throated purr of the motor, the shrill screech of breaks emanating from the street out front commands my attention.  I kill the engine.  A car door slams.  Grunting is followed by a resounding thump.  Another metallic bag of a vehicle door, and then the roar of an engine.  Soon a UPS truck enters my sight as the driver rapidly rounds the corner, speeding through the neighborhood making deliveries.  This is the moment I’ve been waiting for.

Restarting the mower, I quicken my stride and finish the remaining passes over the uneven grass at a military trot.  After abandoning the mower in the shed, I head for the front of the house.  A cumbersome box containing my new bar-b-que lays in the driveway, waiting to be hoisted aloft and deposited in the garage.  It’s a great-big, beautiful man-thing.  Assembly required.

While using the back of my arm to brush droplets of perspiration from my brow, I affectionately pat the box with my other hand, dreaming of the thick, juicy, hunks of meat, grilled to perfection, that will adorn my plate and satisfy the palates of my grateful guests.  That is, of course, after I lovingly, and manfully, assemble the barrel smoker and install it in a place of prominence on the deck.  As I manhandle the box containing my new monstrosity, I can already hear the clink of beer bottles in my mind and taste crispness of the ice-cold liquid-gold that will accompany the steaks.  Good food, good friends, and great beer: the joys of summer.

After depositing the box in the center of the garage and rummaging through marginally organized shelves for the appropriate tools, I set to work.  Mosquitoes, absent from midday sun are awakened by my virile banging.  Slowly, they creep from the cool hiding places within the shady recesses of the garage to buzz sluggishly around me.

I snort, resulting in mosquito inhalation.  My left nostril becomes the source of unwanted nasal vibrations.  Buzzzzz.  Coughing, hacking, and blowing, I gyrate until I ride myself of the intruder.

Mosquitoes are an unfortunate by-product of living next door to the crazy-cat-lady and just as annoying.  The strays she shelters kill the swallows, use my raised tomato beds as litter boxes, and refuse to come to terms with the sanctity of the fence separating her property from mine.  This, despite the sign which reads, ‘I believe in the Bible & the 2nd Amendment. Trespassers will be sent to meet their maker.’

Resuming my work, I manage to get the base assembled with only minor swatting.  With my back exposed and my arms wrapped firmly around the smoker barrel, the first needle-like nose jabs through my cotton shirt, which is woefully insufficient to protect me from the coming onslaught.  Helpless to swat in my defense, I hold the barrel over the bar-b-que’s legs, hovering vulnerably, making sure the screw holes align, as the swarm descends.  Hundreds of venomous proboscises pierce my skin and drink my blood.

Squealing in octaves previously deemed impossible to reach, I drop the barrel upon the base and hastily retreat into the sanctuary of the sun.  The swarm, thick as a storm cloud, awaits my return, hovering in the shadows just inside the garage.

I drop and roll for cover.  From the relative safety of the rose bushes, I scan the neighborhood for assassins more deadly than mosquitos.

A jolt of awareness runs through my body as I finally find and lock-in on the target.  At the end of the block a pair of teenage boys have the hood up on a 1987 Ford truck.  The engine coughs, sputters, and dies, then backfires again as they try the key one more time.

Harmless.  Mostly.  Unless, like me, you’ve spent time in Iraq, at which point their seemingly innocent interest in mechanics conjures up images of Falluja.

I crawl out of the bushes and rake the leaves from my hair before examining my wounds.  The thorns left long, painful scratches on my forearms.  I vow to hit the roses with Roundup later.  I have no use for plants that insists on drawing blood.

From across the fence, my fusty, mid-fifties, neighbor-lady, outfitted in a beekeeper’s hat, proffers a dirty look while gliding beneath a basket-ball sized wasp nest.  She looks ridiculous and I half-hope the nest will fall on her, causing her to flounder pathetically in the knee-high patch of weeds she calls a lawn.  I offered to remove the wasp nest for her months ago, when it was still small.  Rebuked, I was told I should endeavor to live in peace with all God’s creatures.

Attempting to save face after being caught cowering in my own shrubbery, I lash out.  “Do something about those thistles.”

I nod toward the offending plants.  “This is America and those are Canadian.”

She gives me a disdainful look and begins assembling what is either a solar cooker or the radio satellite she uses to connect herself with the mothership.  In less than a minute the shiny, reflective material is arranged in such a way that it could blind small children.  After which she transitions to depositing food in the many cat dishes scattered amongst the dandelion littered lawn.

In the center of my tidy well-kept yard, the bird bath sits empty and bone dry.  Beneath my eaves a ghost-town of birdhouses, formerly inhabited by mosquito-eating swallows, offers only melancholy silence in answer to my predicament.  The neighborhood is prowled by new inhabitants now, feral cats.  They were drawn in by her handouts and have overstayed their welcome.  As I stand watch, the furry fiends appear from under sheds, wobbly porch steps, and the mysterious interiors of overgrown junipers.  They swirl about my neighbor in an intricate dance whose rules dictate that neither should get too close, and they absolutely never touch.

Leaving my neighborhood nemesis to her hoard of furry menaces I head inside, in search the one tool I forgot to bring with me at the onset of bar-b-que assembly.  A can of deet, swiped from the National Guard Armory.  Mosquitoes are on duty more often than guardsmen.  I figure, if the United States Army wants me fit for duty, I needed relief from mosquitoes more often than one weekend a month and two weeks a year.

Coated in poison, I return to the garage to seek my revenge on the swarm.  The afternoon progresses smoothly now that I am able to assemble my bar-b-que sans swatting.  After it’s complete, I take a moment to admire the big, black beast.

Feeling triumphant, I position the matte-black monster on the deck, soak the charcoal in lighter fluid, and light the coals.  A test run before inviting the clan over for a proper inauguration.  Flames resembling hell-fire erupt from the belly of the beast and shoot skyward.  Twisting the top off a beer, I christen her Bertha, and then sink into a deck chair to watch the sun kiss the horizon.  When the last fiery vestiges of sunlight streak their way across the dusky sky, my steak is done and I savor it in silence.

Later, covers pulled over my head, desperately avoiding the drone of a lone mosquito, I fight a losing battle with sleep.  The sheet alone is no defense against the terrorist’s knife-like jabs.  To find safety, one must be fully encased in the body-armor of the comforter.  The night is hot and muggy, and with the covers pulled over my head to avoid becoming a midnight mosquito snack, it’s hotter still.

I emerge from the covers, gasping to draw a cool breath.  Buzzing resumes.  I retreat to safety behind the green line of the covers. The process repeats at regular intervals, leaving me frustrated, tossing and turning, and swatting blindly.

My tormentor has a name.  It winds its way from my now addled, sleep-deprived mind, trips over my tongue, and escapes into the darkness.  “Beezlebug.”  Satan in the form of a mosquito.  And, like Beelzebub, this mosquito cannot be cast out.

Inside my bedroom, the buzzing intensifies into an earsplitting demonic whine, excruciating to endure.  Unable to sleep, I wonder what, if anything can be done to bring peace to the bedroom.  Then, with a shock that physically rocks my body, I realize that now is the time to exercise the nuclear option.  Arising, I give myself over to bad intentions.

Now that I am out of bed, the satanic buzz has ceased.  I no longer hear an audible drone of a lone mosquito, but rather feel the buzzing inside my cranium.  I’m not entirely sure who is in possession of my faculties, me or Beelzebug?

Psyched and ready for battle, I seek the coolness of the starry night.  Deep shadows conceal my movements inside the garage as I ready my munitions and arm myself for combat.  After a final equipment check, I stalk across the lawn, a can of Raid protruding from each pocket, WeedBeater Ultra attached to the hose.  Standing just inside the property line, I survey the battleground.

In the center of the offending jungle is a blue kiddie-pool, tinged green, owing to a thick coat of algae.  The stagnant water is a breeding grounds for mosquitoes and a watering hole for every stray in a five-mile radius.  I consider dumping its contents and carting it off, but a conviction for theft of kiddie pools is not the kind of thing one wants attached to their name when applying for jobs as a security guard.

The wasp nest is quiet, but movement catches my eye and I track a pair of tabbies patrolling the perimeter.  A trio of wide-eyes kittens practice combat maneuvers in the parade grounds by shed.  More eyes peek for beneath the porch steps as the sentries change duty.

They won’t know what hit them.

At precisely zero-dark-thirty I unholster the Raid cans and hit the wasps with both barrels.  Quickly overwhelmed by my superior firepower, a cascade of death results.  Gentle pattering sounds fill the night as the corpses fall like rain to the weedy ground.

Discarding my empty cannons, I change weapons, flexing the hose in my hand before pulling the trigger.  A gush of water erupts like artillery fire, gunning down everything within range.  Her yard and mine.  A blurry mass of cats scurries to safety as I soak the offending plants: Canadian thistle, bindweed, dandelion, tansy.  Exhilarated, I realize this is biological warfare at its finest and there is nothing like chemical weapons to clear an area.

Out of ammunition, I return the hose to its original purpose and slip my thumb over the top to form a jutting spray of water.  A final sweep scatters the feral hoard seeking refuge beneath my neighbor’s steps.  Beyond the street lights, the disorganized enemy forces silently retreat into a blackness as thick as India ink.  The night is mine.

A wave of satisfaction washes over me as I revel in my victory.  And like any war, my neighbors will awake in the morning completely unaware of the carnage wrought overnight on their behalf.  I have done my duty.

Now avenged, the bed calls.  I answer and find that Beezlebug has left the building.  The devil has done his deed.