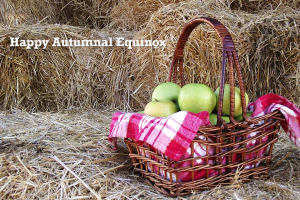 The timing of the Harvest Festival is a tricky one for Pagans, as harvest occurs at different times in different regions. There is no specific date across Celtic culture that corresponds to a harvest festival, despite the fact that such festivals very much did exist. Herodotus first mentioned the Celts in 5 BCE and noted that they principally lived along the upper Danube River. At the time, their principal festivals, Imbolg, Beltane, Lughnasad, and Samhain, marked the changing of the seasons.

The connection between harvest and the autumnal equinox traces its origins back, not to Celtic, but to Germanic traditions. Roman historian, Tacitus, first described Germanic people in 98 CE, placing them in upper Germany and Denmark, in an area which bears the name Angeln. Like the Celts, the Anglo-Saxon Pagan year also contained four holy days to mark the changing of the seasons: Yule, Lencten Efniht (lengthening equal-night), Litha, and Haerfest Efniht (harvest equal-night).  Eostre was not recorded in the place of the Lengthening equal-night until the 8th century. END_OF_DOCUMENT_TOKEN_TO_BE_REPLACED