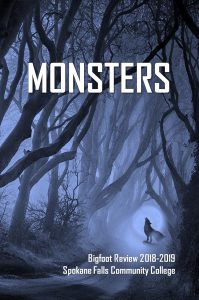 After many delays, sabotage attempts, efforts to censor the book, and having endured intimidation tactics by school administration officials, the SFCC Pullman Campus Creative Writing Club is pleased to announce that this year’s anthology, Monsters, has finally been published.

In an email dated March 7, 2019, I learned that Dean of Student Services, Cynthia Vigil had gone so far as to contact the Office of the Attorney General for the State of Washington, who is reported to have told her she could not censor the anthology.  Attempts to do so violate the students First Amendment rights.  However, that did not prevent Ms. Vigil from pressuring students and faculty alike, nor is this is the first time faculty and staff have attempted to censor student work.  (See: “Concern, condemnation after Spokane Falls student newspaper reports on sex scandal.” Seattle Times.  April 5, 2018.)  Ironically, both censor attempts were for the same reason, the administration does not like being reminded that sexual predators are monsters. END_OF_DOCUMENT_TOKEN_TO_BE_REPLACED