Blood in the Sand was a gripping read from beginning to end.

Philip Entwistle doesn’t believe in God and he certainly doesn’t believe in witches. But all that changes when the mild mannered history professor goes up for promotion and needs a Hail Mary to advance his career. Finding himself at the center of a trumped up sexual assault charge that nearly cost him his job, deliverance comes in the form of the occult as he researches the life of the famed English explorer, Sir Francis.

The book is full of delightful surprises, starting with the poem in the table of contents. Easy to read prose speaks to the heart of our humanity. Never shying away from difficult questions, the author takes the reader on a journey through time as Sir Francis’s experiences cause Philip to question his own doubts about religion, “After all, I am just a crazy man in the desert, hearing voices. Isn’t that how religions start?”  And then moves on to confront the stigmas of interracial marriages, “He has gone native, they will say and sneer. And I have. Gladly, with all my heart.”

END_OF_DOCUMENT_TOKEN_TO_BE_REPLACED 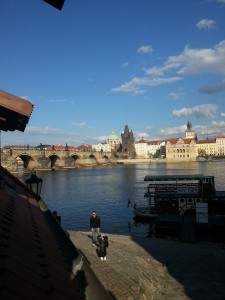 A fellow writer, M. J. Kobernus, recently attended a conference in Prague.  Michael reported that his hotel room overlooked the city and the Charles Bridge.  Naturally, I was jealous and asked him to post pictures, which he did. (At Right)  The photograph quelled my envy.  I’m sure the city is lovely, there just isn’t green space anywhere in the photograph.  Realization that I have a much better view from my own window prompted me to delve into my electronic files for a few cherished photographs.

#1 thru #5 were taken on the Palouse.
#6 Clearwater River
#7 Camas Prairie; but the yellow field is rape seed.  (#1 is camas.)
#8 Dent Bridge, designed and construed by the same man who built the Golden Gate Bridge.
#9 Priest Lake
#10 Hell’s Gate
#11 My naked toes at Jerry Johnson Hot Springs in the Selway Bitterroot Wilderness.
#12 Wilson’s Banner Ranch 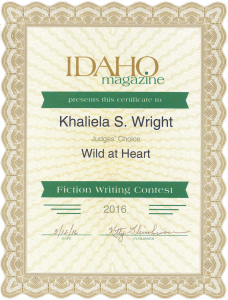 I recently won an award in a short fiction contest. You’d think that would be cause for celebration, but you’d be wrong.  The night I announced my success, I had more spiteful comments directed at me than any other night since joining the critique group.  I very nearly got up and walked out.  It reminded me of why I wrote “Wild at Heart.” Americans are hateful and spiteful, and I’m tired of that vitriol being spewed my direction.

Authors usually avoid autobiographical characters, but I figured, why not?  It’s just a short story, and written in three languages.  I didn’t figure it would go anywhere, let alone get an award.  So my story, “Wild at Heart,” is really an essay that could just as easily be titled, “A Day in the Life of Khaliela.” The only differences being, I work for the Census Bureau, not the Department of the Interior and I want demographic information, not water samples. Unfortunately, the people I meet are the same. I’ve been shot at while working in the field and I get death threats on occasion. It’s been about six months since my last death threat, so I’m due for another any day.